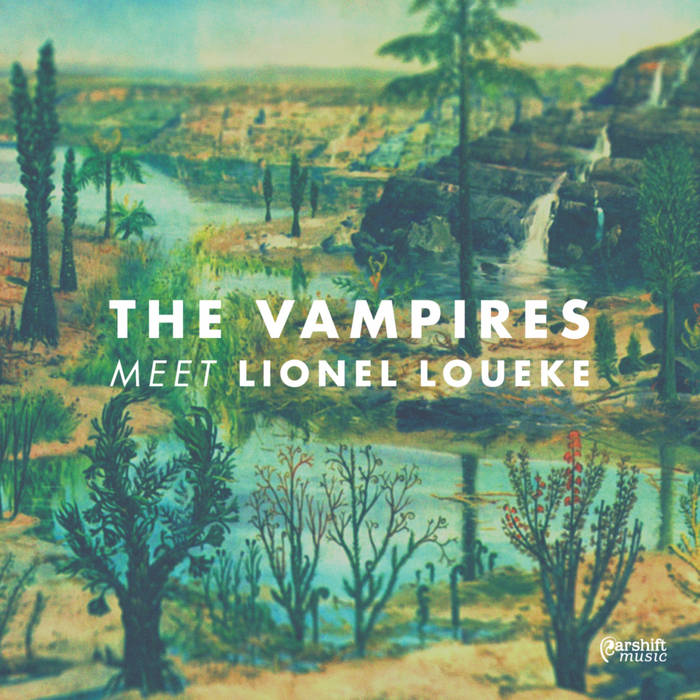 drewh111 Well, first, Lionel Loueke is one of the most original guitarist of recent times. The Vampires seem to be a perfect complement to this talent. Every piece on this album is amazing. This group really does have a wonderful capacity for blending musical styles and idioms in a creative and original way. Can't listen to it enough.

JazzRog Infectious grooves that banish depression. What's not to like?

"If jazz music is about continuously reinventing and staying on your toes, then 'The Vampires Meet Lionel Loueke' is a phenomenal jazz record by a worldly, talented, and newly minted five-piece band." ****  Chris Tart (Downbeat)

"This was the perfect summer record that pulled off the trick of being both an ambient soundtrack to life on the move while remaining capable of standing up to concentrated home listening."  Phil Barnes (All About Jazz)

“It is gold all over. Original, melodically minimal compositions with hidden details scattered in every corner you look—covering nearly every topographic musical element and framed in a cohesive whole.” Friedrich Kunzman (All About Jazz)

“One of my favourite albums of the year was a jazz recording.. …It’s beautifully constructed melody sounded so classic, so perfect, that it had already become deeply ingrained in my memory. Of course, I have been listening to this album a lot. This one’s a real winner.” David Faulkner (The Saturday Paper, Australian Music Prize chair, Hoodoo Gurus)

The music on the album is the result of years of musical development and ambitious preparation, as the band set out to make their fifth album something different to the past four; South Coasting, Chellowdene, Garfish and Tiro. The band brought Lionel to Australia to tour and record, playing new music written for the project. Lloyd Swanton, well known as the bassist from The Necks, produced the album.
Lionel has enjoyed a meteoric rise in the jazz world, collaborating with seminal jazz figures including Wayne Shorter, Esperanza Spalding and Herbie Hancock, who praised him as “a musical painter”. The Vampires’ co-leader and saxophonist Jeremy Rose says “Lionel effortlessly joined The Vampires, normally a chordless quartet, for this project with humility and a way of collaborating that allowed his own influence and character to come through while perfectly fitting in as a member of the band.”

The Vampires have been relentlessly touring for the past 10 years throughout Australia, as well as performances in the UK, Canada and Europe. Combining risk-taking improvisation, sophisticated compositions and an uncanny sense of dialogue between the sax/trumpet frontline, the band has developed a style of its own. This collaboration with Lionel Loueke is both an honour for the band, to be working with one of the most distinctive artists of his generation, and a perfectly normal and logical part of The Vampires’ work.

The Vampires Meet Lionel Loueke features music composed by Jeremy Rose and Nick Garbett for this collaboration. Each has written about half of the band’s music for the past 10 years, and their compositional styles have forged the band’s sound as much as their playing has.

'Endings and Beginnings' (Rose) is an improvised sketch composed by Jeremy in two parts, bookending the album. The piece is dedicated to the memory of his grandfather and the birth of his niece, both of which happened around the same time.

'Hard Love' (Rose) features Rose’ bass clarinet and Zwartz’s bass, opening with an riff and melody that echoes traditional Jamaican Nyabinghi music. The piece serves to remind us of how difficult but rewarding it can be to love one another, even when things seem too hard.
Freedom Song (Rose) is dedicated to the refugees on Manus Island and Nauru, Australia’s offshore detention centres. These centres are based on an unnecessary and inhumane policy of offshore processing, have been condemned by the UNHCR, Australian Human Rights Commission and others, and have been the site of riots, self immolations and incredible stress amongst the detainees. Many have been stuck on these Islands for years with no certain future, and this work serves to remember those that are incarcerated there.

'Green Green Green' (Garbett) is a tribute to Al Green and is Nick’s attempt to capture the aesthetic of some of Green’s music. Not a tribute to the other type of green, he swears.

'Bendalong' (Garbett) is a relaxed reggae feel piece by Nick inspired by the South Coast of New South Wales, Australia, and the sleepy surfing town that gives the piece its title.

'Torta Salata' (Garbett) is a soul-drenched tune by Nick, inspired by his love of Italy, his Italian girlfriends cooking, and the ‘salty cake’ that gives its title.

'Suck a Seed' (Rose) takes its title from the critically acclaimed ‘Keep On Keepin’ On’ documentary on trumpeter Clark Terry, directed Jeremy and Nick’s friend and former housemate Al HIcks. The title of the piece comes from a classic Clark Terry line in the film, “If at first you don’t succeed, suck a seed!”

'Ubud Bubble' (Rose) is penned from an experience staying in the villages of Ubud, Bali, where the smoke filled streets waft with the sounds of Gamelan rehearsals and visitors fill the yoga retreats and massage centres. The piece conjures a sense of magic and mystery of the place, where you can literally lose all sense of time.

'Brand New' (Rose) is a composition inspired by the feeling of a new start at life, triggered by recent events in Jeremy’s life.

All Compositions Registered with APRA © 2016 All Rights Reserved.
Unauthorised Duplication is a violation of applicable laws.

Special thanks to all our families, partners, Pozible supporters, the PPCA, the Australia Council for the Arts, Ben Hauptmann, Jack Leitenberg, Wollongong Con, SIMA, and the Melbourne, Perth and Brisbane International Jazz Festivals.

This project has been assisted by the Australian Government through the Australia Council for the Arts, its arts funding and advisory body. We acknowledge the support of the Phonographic Performance Company of Australia (PPCA).

The Vampires are trailblazers for a new generation of creative jazz talent from Australia, having gained critical attention worldwide by pushing the genre into new realms. Creating a distinctive sound that is undoubtedly their own, the band has garnered praise from Downbeat (“phenomenal”), UK Guardian (“seductive genre hopping creativity”), and All About Jazz (“gold all over”). ... more

Bandcamp Daily  your guide to the world of Bandcamp